DAKAR, Senegal, May 27, 2022/APO Group/ – The Global Mercy™ ship, purpose-built by international NGO Mercy Ships to provide surgical care to populations abroad, arrived in the port of Dakar, Senegal today. While in port, the crew of the 37,000 GRT hospital ship will participate in a week of ceremonies and events to inaugurate this new vessel into service in Africa, hosted by H.E. President Macky Sall. In addition, medical and training crew will carry out capacity building sessions onboard during the month of June alongside the surgeries on the Africa Mercy® which has been docked in the Autonomous Port of Dakar since February. 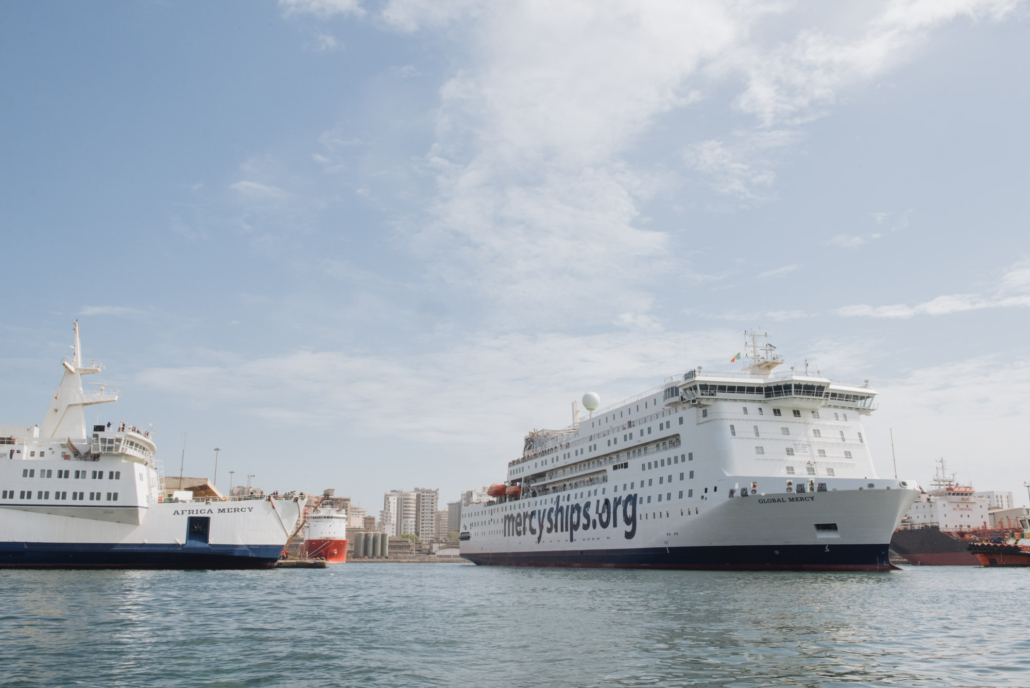 The Global Mercy arriving in the Port of Dakar and joining her sister ship, the Africa Mercy.

On Monday morning May 30th, H.E. President Macky Sall will facilitate the approval of the Dakar Declaration with invited heads of state on board the Global Mercy. This historic agreement builds on foundations formed earlier this month at an International Symposium where Ministers of Health and health experts from 29 African nations met in Dakar to discuss an ongoing baseline assessment and put forward a commitment to advance access to surgical, obstetric and anaesthetic care in their nations. This declaration supports Sustainable Development Goal number 3* and aims to accelerate measures to focus on safer surgery as a key element of health provision.

“Today, under the patronage of H.E. Macky Sall, we welcome the Global Mercy to Senegal. The world’s largest civilian-built hospital ship joins the Africa Mercy® to celebrate 30 years of Mercy Ships service in Africa and delivery of key medical training,” said Dr. Serigne Diop, Advisor to the President of Senegal. 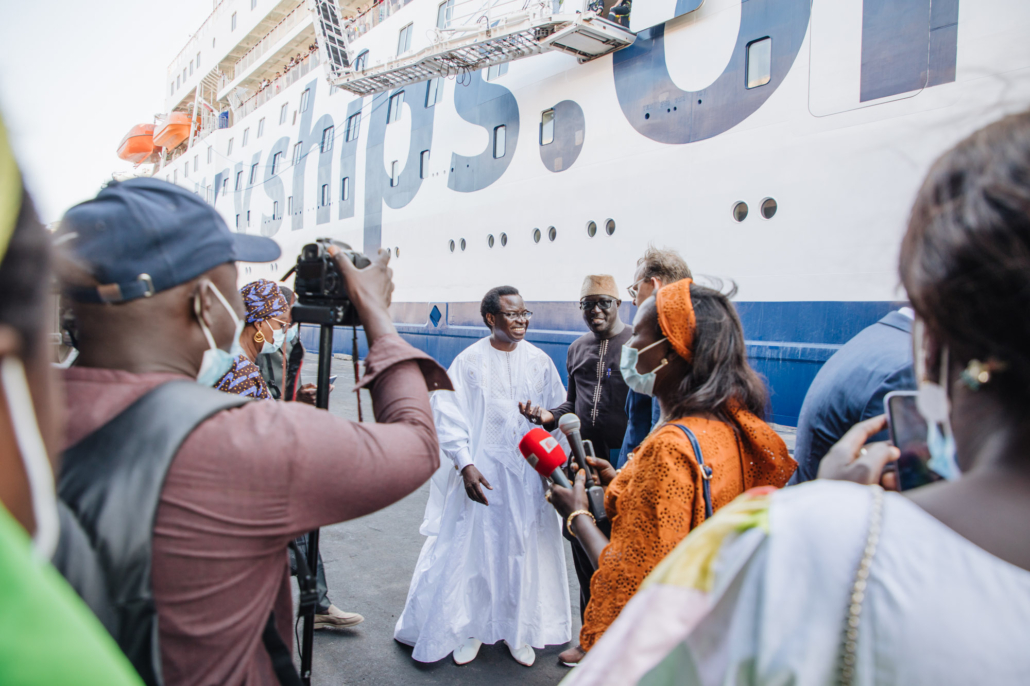 Serigne Gueye Diop, Presidential Advisor, is interviewed durnig a press confrence as the Global Mercy enters the Port in Dakar.

“Mercy Ships serves the most vulnerable populations in Africa who lack access to safe and quality surgical care. To meet this need, we offer free surgical interventions and medical training, providing more than 108,000 surgical procedures since 1978. As the next step in this mission, we are committed to supporting the implementation of the Dakar Declaration, which will strengthen and accelerate access to surgical, obstetric, and anaesthetic care across Africa over the next decade,” stated Mr. Gert van de Weerdhof, CEO of Mercy Ships.

‘’With this continental roadmap to increase surgical care in Africa, Mercy Ships is committed to offering its hospital ships in ten African countries over the course of the next five years,’’ declared Mr. van de Weerdhof.

Senegal has been actively preparing for the coming of the Global Mercy since early this year. In March, it was officially announced aboard the Global Mercy in Rotterdam that Senegal would be the first host country for the new ship. The announcement in Holland took place during an event for Senegalese ministerial delegates including Minister of Health Abdoulaye Diouf Sarr, Senegal’s Ambassador to the Netherlands Momar Gueye, and ambassadors from South Africa, Cameroon, Madagascar, Guinea-Bissau and Sierra Leone.

In partnership with Senegal’s Ministry of Health, the Africa Mercy® is currently offering corrective surgeries for free to those with little to no access in Senegal since February 2022, notably maxilla-facial surgeries, plastic reconstructive and fistula repairs. Patients benefitting from these surgeries have been selected with the support of the Ministry of Health and local partners from across all fourteen regions of the country.

Medical training aboard the Global Mercy for local healthcare personnel during the ship’s visit will complement this partnership with the Senegalese Ministry of Health. 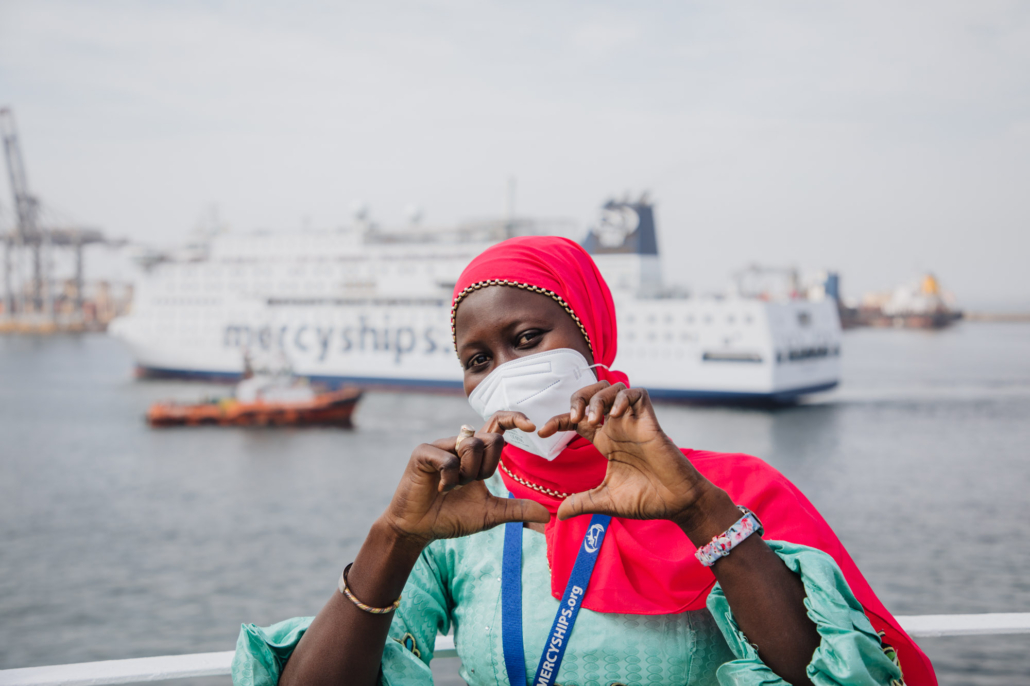 For more than three decades, Mercy Ships has contributed to the sustainable development of local surgical care throughout sub-Saharan Africa where 93% of the population lacks access to safe surgical care. Commemorating its 30th anniversary in Africa this year, Mercy Ships is strengthening partnerships with African countries and accelerating national commitments to increase provision of safe surgical, obstetric, and anaesthetic care in Africa by 2030 by co-hosting a number of milestone events.

The Global Mercy is 174 meters long, 28.6 meters wide and has space for 200 patients, six operating rooms, one laboratory, general outpatient clinics, a dental clinic and an eye clinic. The hospital decks cover a total area of 7,000 square meters and contain the latest training facilities. When in full service, the ship will be

able to accommodate up to 950 people when docked, including crew members and volunteers from all over the world.

* Sustainable Development Goal #3: Ensure healthy lives and promote well-being for all at all ages

ABOUT MERCY SHIPS:
Global health for the last two decades has focused on individual diseases, while surgical care in low- resource countries has not received the attention it needs. Lack of surgical care resulted in almost 17 million deaths annually. Mercy Ships is an international faith-based organization that operates hospital ships to deliver free, world-class healthcare services, medical capacity building, and health system strengthening to those with little access to safe surgical care. Since 1978, Mercy Ships has worked in more than 55 countries, with the last three decades focused entirely on partnering with African nations. Each year, volunteer professionals from over 60 countries serve on board the world’s two largest non- governmental hospital ships, the Africa Mercy® and the Global Mercy. Professionals such as surgeons, dentists, nurses, health trainers, cooks, and engineers dedicate their time and skills to the cause. Mercy Ships has offices in 16 countries and an Africa Bureau. For more information, visit mercyships.org and follow @MercyShips on social media. 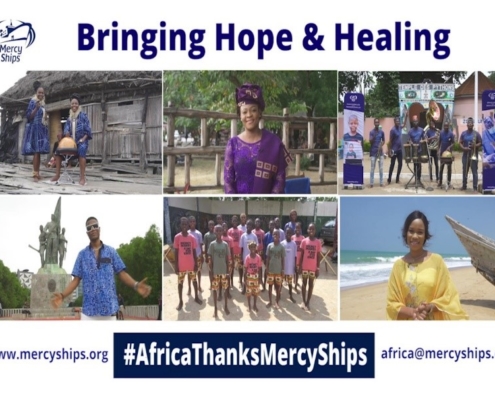 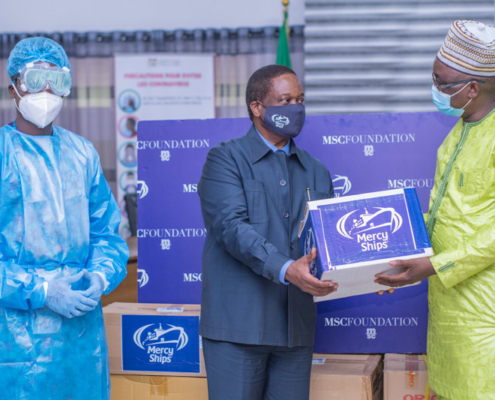 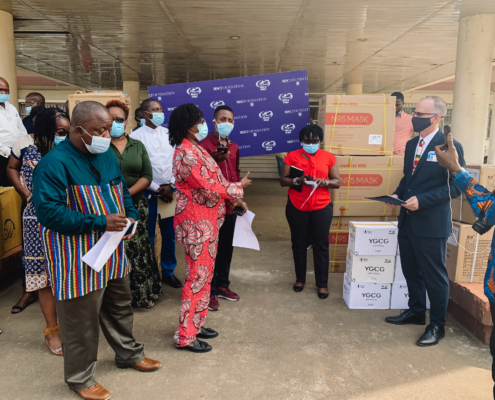